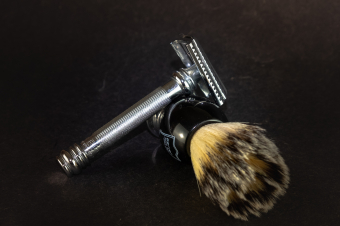 I think I’m safe in assuming that when it comes to leg-shaving, most of the women reading this article are long-time users of disposable razors. Those Venus disposables do a fine job, but they always get slimy in the shower and the heads cost a lot of money to replace. On top of that, they are horrible for the environment and will spend the next few centuries heaped in a landfill or floating in the ocean.

But is there a better option? It seems like everyday Gillette and others are launching fancy new men’s razors that have more blades, oscillating heads and whatever else their engineers have cooked up. But women’s razors are mostly unchanged and, frankly, pretty lame. Well, completely by accident, I found a far better solution and it doesn’t involve a new-fangled razor with 17 blades and sonic pulses, or whatever. It’s old. Very old.

A few years ago, my husband ditched his Gillette for the kind of old-fashioned, single-blade safety razor that your Great Grandpa probably used during the Great War. I never gave using it myself much thought until I forgot mine in my mother's shower after a visit. So what do I do? Buy a replacement Venus? There on the bathroom counter is this shiny relic of men’s shaving as a real option. I decided to give it a go and had, much to my surprise, a great shave, and no cuts! I’m a convert!

Here are some of the benefits for switching to a single-blade safety razor:

So, ladies, stop suffering through those ridiculous and expensive ‘women’s razors’ and do both your legs and wallet a favour. Switch to a Merkur double-sided safety razor and finally enjoy shaving your legs.

Visit our store to purchase your new razor!